You may now download you own award from SAC 2011. 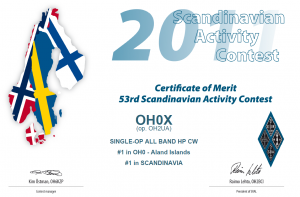 Go to the result pages (menu above) and look for your 2011 result. In the listing, click on the number in the RANK column for downloading the award PDF-file. If you click on your call, you will get the UBN-file. If you notice anything wrong in the listings or in the award, please email us: support@sactest.net

Last year’s SAC entailed many general developments, including open logs and log checking reports, and new categories to make the contest more attractive to non-Scandinavians. Still, there are always things to develop further. For example, the important Scandinavian Cup has practically always been a simple (although very tough!) OH-SM affair, and the spectator aspects of the contest have been lacking.

This year SAC is teaming up with the popular online scoring site cqcontest.ru to dramatically improve the real-time features of the contest. Scandinavian national teams of six stations from different categories will compete in a new “contest within a contest” for country and glory. The teams, chosen by each national league, will use real-time scoring and, in many cases, provide real-time audio and video from their efforts through the above-mentioned website to appease curious spectators.

SAC will be the first annual ham radio contest to showcase the use of real-time technology in this spectator-directed manner. Coupled with the prestigious competition between national teams, it is hoped that a significant boost in media interest and excitement among the ham population will result. Simple briefs to help with outreach to journalistic outlets will be provided in English for use by the national leagues, contest clubs, and local hams.

Note: The SAC National Team Contesting Trial is a trial and is done in parallel with the traditional Scandinavian Cup.