See you all in Friedrichshafen next week! SM5AJV SAC CC Team Leader will be there.

You will find him near the SSA booth, stand number A1-843 . Come and have an eyeball QSO about SAC and contesting! Take some of our promo-cards and spread the word about the Scandinavian Activity Contest among your friends! 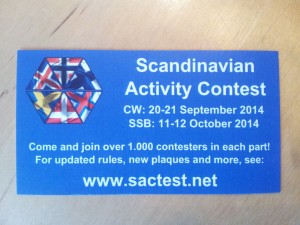 The Scandinavians are already planning for this years battle, building new antennas, modifying strategies and planning for two great weekends at the radio.  With some luck propagation will be even better this year. Put both SAC CW and SSB dates in you calendars now!

The Contest Committee proudly invites all radio amateurs to the 2013 Scandinavian Activity Contest, which take place as follows:

RULES
The rules are the same as last year, no changes has been made 2013. But please remember the frequency band rules. “On 3.5 MHz, Region 1 stations must not transmit below 3510 kHz on CW or above 3790 kHz on SSB.” QSO:s made in these regions will be removed when the score is calculated. So don’t go there and waste time.

Closing date for log submission is two (2) weeks after CW and SSB contest respectively. Our Log Robot will take care of your log and if you see anything wrong, you may re-submit your log again.

ANNOUNCE YOURSELF
Share your plans with others by announcing your activity here by filling in the Announcement Form . Both Scandinavians and non-Scandinavians are welcome to inspire your friends by telling your plans. Those who have already signed up can be seen at:

CHECK LAST YEARS RESULTS
While preparing for this years “Polar Battle” you may want to look at former years results. END_OF_DOCUMENT_TOKEN_TO_BE_REPLACED

After SAC 2012, a web-based worldwide survey in English was undertaken to gauge the feelings and thoughts of radio amateurs concerning SAC, its current state, and envisioned future development. An invitation to respond to the survey was sent by e-mail to hundreds of former SAC participants and to the CQ-Contest reflector. A total of 219 responses were received, constituting a reliable base for forming a good understanding of how SAC is currently regarded.

The contest committee extends a warm thanks to all who participated in the survey. As a whole, it appears that most respondents appreciate SAC and the efforts that have been undertaken to develop the contest. Criticism and constructive suggestions were also received, and they serve as a valuable aid in the further development of SAC rules, awards, promotion, etc.

It ‘s only a couple of weeks left until SAC CW. What are you plans for SAC 2013? Let others know by announcing your activity.

Go to the Announce Form and add your data! You can submit and change your entry as many times as you like.

Make a note already now in your calendar for two nice weekends with lot of Scandinavian stations on the shortwave bands. While planning, take a tour the web-site and look for your past results in the results database. We are looking forward to see you again in the Polar Battle 2013.

Select the Results page in the menue above and take a look.
In order to see and download your PDF-award, click the rank number on the left.

It’s time to warm up for the SSB part in the Scandinavian Activity Contest. Over 300 Scandinavian stations with their exotic fluttery signals were on the air in September’s SAC CW, with about 1200 total logs submitted. This promises a large and exciting turn-out on all sides of this popular “Polar Battle” also on SSB!

SAC CW 2012 is over. The activity was high and the contest logs are pouring into the log robot. Thanks to all participants, for making SAC a great contesting experience. We are impressed over the big QSO numbers from outside Scandinavia.

The log-robot stood up well with its first pile-up and we saw about 250 logs received the first hour after the contest. If you get trouble with the robot, please check your Cabrillo log. If you logged on paper there are several possibilities to make a Cabrillo log. You may use the PC-program SACMan or you can try WA7BNM’s SAC CW web form for entering your QSO’s.

We have now added an Announcement page for advertising your activity during SAC CW and SSB.
Go to the form and fill in your data. The entry will show up on the Activity pages for CW and SSB. 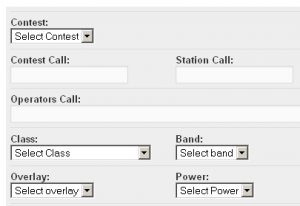